Not to be confused with The Axeman, Dr. Frank Zelmann's creation that used John Wilson's brain.

John Wilson (born June 15, 1969) is a minor character in Downfall. Also known as the Devonshire Axeman, he is a mental patient that has a history of paranoid schizophrenia. Besides being found in the cellar as a corpse, he doesn't do anything else in the game.

John Wilson is a mentally unstable murderer who murdered several people one night in Devonshire with a fire axe. He has a patient file that can be found on a trolley table next to his corpse.

Known by the press as the Devonshire Axeman who brutally murdered several people using the fire axe."

John Wilson killed five locals on a stormy night with a fire axe. Afterwards, the police caught him and gave him a death sentence. He had paranoid schizophrenia so it is likely that he was mentally unstable before.

Joe finds Wilson's corpse and takes his brain in a glass bowl full of ice cubes to give to Dr. Frank Zelmann. However, for taking his brain Wilson will turn off the gas, making it so Joe can't turn on the gas stove in the bathroom on the third floor. To solve this, Joe cuts open the head of the pig in the freezer with a saw and gives the pig's brain to Wilson, fooling him.

Although Wilson doesn't do anything else in the game after this, he lives on in The Axeman, Doctor Z's creation that used his brain. 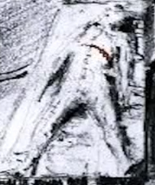 Wilson's appearance in the overworld.
Community content is available under CC-BY-SA unless otherwise noted.
Advertisement